My husband and I have been hearing the hype about Harry Potter and the Cursed Child since last summer. While I like Harry Potter and read most of the books when I was younger, Aaron loves Harry Potter–he’s a huge fan and was enthralled with the possibility of seeing such a momentous play. Harry Potter and the Cursed Child is an original new story by J.K. Rowling; it’s the eighth story in the series (released nineteen years later) and the first Harry Potter story to be presented on stage. It’s told in two parts, and so playgoers either see both in one day or come back on two consecutive days. While we considered joining the mad dash to purchase tickets online last year when they were released, we weren’t sure when or if we’d be in London–but before we could make a decision, tickets were gone! Every last show sold out in under an hour. 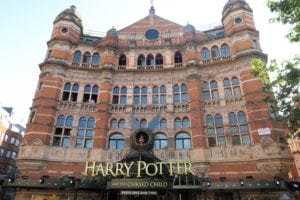 Fast forward to now: A few tickets seem to be available on eBay and Stubhub, but they are upwards of £1000 a pop. Unbelievable! Since we’re in London, we figured there had to be an easier way, so we wandered over to the West End to see what was up at the Palace Theatre. I figured that even if we could acquire tickets somehow, they’d be outrageously priced–but fortunately, I was wrong! 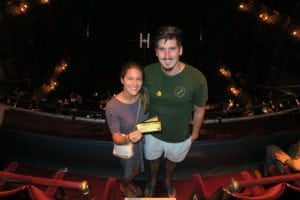 Here’s how we got tickets and how you can (try) too: 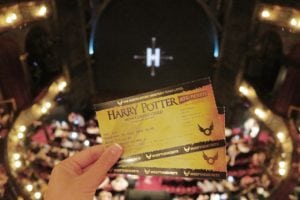 As far as the show itself… As you would expect, the entire thing was truly incredible. The special effects were outstanding and the story was riveting. People cried as we left the theatre! Even I got a little misty-eyed, and I’m not even a Potterhead. I wish I could share more, but I promised Mrs. Rowling I would #KeeptheSecrets… 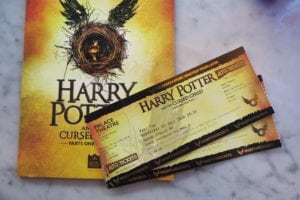 One last tip: There’s a gift shop with exclusive merchandise inside the theatre–which you can only access if/when you’re seeing the play–so bring a little extra to spend if you want souvenirs! There are branded t-shirts, tote bags, ties, pens, keychains, magnets, postcards, etc. They also sell the program (pictured above) for £5; it’s nicely assembled and informative, so we were glad we purchased it.

Have you seen Harry Potter and the Cursed Child? Are you hoping to? Questions, comments, and stories of similar experiences are welcomed in the comments below!

Here is the performance schedule and all the times you can try to get in:

Review of Barcelona eBikes: Wine and Tapas Tasting Tour
August 21, 2016
That One Time I Got Backstage at Beyoncé’s Formation Tour
July 31, 2016
Hotel Bloom Review: Fresh, Colorful Design in the Heart of Brussels
August 11, 2016